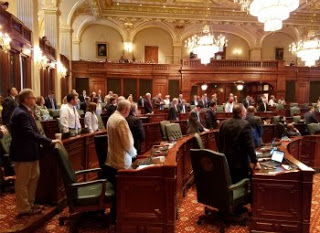 Every two years, with the start of a new General Assembly, Speaker Madigan requires two critical votes from Democrat members. The first, their vote to re-elect him Speaker of the House, which happened on January 9th. The second, in order to maintain near-complete, singular control over the legislative process, he requires them to vote to adopt his proposed set of House Rules. These are the rules that govern how the House of Representatives operates for the next two years.

The vote for the adoption of House Rules took place on Tuesday afternoon. Despite having an alternative offered, House Democrats united again to give Speaker Madigan control of the legislative process. Assistant House Minority Leader Norine K. Hammond (R-Macomb) issued the following statement in response to the adoption of the Speaker’s House Rules:

“I joined the House Republicans in presenting our reform of the House Rules in a resolution, House Resolution 62, today in the General Assembly. We presented this as a counter to Speaker Madigan’s rules that limit bi-partisanship and don’t promote transparency in the politic process. Unfortunately, House Democrats chose to be a united front and give the Speaker control over the process again.”
The House Republicans’ version of rules offered the following reforms for incorporation into the House Rules resolution for the 101st General Assembly:

3. Create Waiting Period After Committee Testimony – Require that the initial testimony and discussion of bills in committee must occur before a vote of the committee on the reporting motion; and such committee vote may not occur on the same calendar day that testimony was heard.

4. Require House Vote for Bills & Resolutions Supported by Bipartisan Supermajority – Provide that a motion signed by 71 members guarantees a vote of the House on a bill or resolution. At least five members affiliated with the majority party and five members affiliated with the minority party must be included among the 71 or more signatories. Such bills would be discharged from a standing/special/Rules committee, or transferred from the regular calendar, and placed on an order of business that the House must go to each day that it convenes in regular session; and sponsors of bills on the order would have the right to call their bills for a vote whenever the House is on that order.

5. Extend Time for the House to Consider Motions to Discharge Standing/Special Committee – Provide that for six session days after the committee reporting deadline the House may still consider motions to discharge from standing or special committees. Currently, bills remaining in committee on date of the reporting deadline are immediately re-referred to the Rules Committee, which means that the motion to discharge from standing committee, which requires 60 votes for adoption, is no longer an option.